2020 has been a year of tremendous challenges for human rights promotion and protection. Authoritarian leaders throughout the international community ignored desperate pleas for democratic governance and respect for human rights. Instead, many governments swiftly moved to close civic space by systematically undermining the activities of non-governmental organizations and suppressing their courageous efforts to call attention to civil, political, economic, social and cultural rights violations. Many of these organizations were labeled “terrorists,” that were spreading “fake news.” As a result, many had their bank accounts frozen, their assets seized and they witnessed their leaders being arrested, and tortured, or even killed.

Women and girls continued to be marginalized, abused and trafficked. Additionally, in public life, while some gains were made, violence against women, including rape and sexual assault, remained a feature of the political landscape. This femicide was especially true for female journalists or those seeking to defend women’s reproductive rights. Migrants, who often risked their lives to seek asylum, were prevented from exercising their legitimate rights by xenophobic and racist governmental policies. Also in 2020, billions of dollars were spent to strengthen militaries, including a new round of supersonic nuclear weapons that are capable of ending all life on earth. As this was taking place, significant populations watched in horror as their life chances were being minimized by the methodical destruction of social safety nets or simply because of their race, gender, color, ethnic origin, sexual orientation or the zip code they live in. Moreover, billions of people continued to live in abject poverty on less than two dollars a day, often so that those of us in rich nations could enjoy a life filled with luxuries and creature comforts.

With regards to the ongoing climate crisis, in 2020, the clash between science and climate change deniers moved us closer to the point of no return, and our trek in that direction also included the poisoning of our waterways and the continued denying of the basic right to clean water and sanitation to nearly four billion people. The privatization of water, this most basic common resource, has led to an affordability crisis in cities such as Detroit, and will eventually lead to a global water crisis.

In 2020 there were new curbs being placed on the freedom of association and the freedom of assembly. For example, worker rights to organized democratic unions were further undermined and our right to protest for rights was often criminalized, from Tennessee to Nigeria.

Finally, although the racist confederate flag came down in Mississippi and numerous corporations made new commitments to diversity and inclusion, racism, racial discrimination, and xenophobia intensified in the United States and across the globe. And in too many cases, this resurgence included racist violence, the desecration of sacred places, the reintroduction of the death penalty, and the use of social media platforms to spread hate, half-truths, whole lies and racist conspiracy theories.

At the same time, in 2020 we witnessed tremendous manifestations of resistance and new forms of activism in defense of human rights and democracy. For example, the efforts of millions of voters to end the white nationalist nightmare that had become real life in the United States was actually the culmination of a resistance movement, led by young people, through the Black Lives Matter protests, whose actions across the globe said, “enough is enough,” and that “we are sick and tired of being sick and tired.”

My father once said,

“We are now faced with the fact that tomorrow is today. We are confronted with the fierce urgency of now. In this unfolding conundrum of life and history, there is such a thing as being too late. Procrastination is still the thief of time. Life often leaves us standing bare, naked, and dejected with a lost opportunity… We may cry out desperately for time to pause in her passage, but time is deaf to every plea and rushes on.  Over the bleached bones and jumbled residues of numerous civilizations are written the pathetic words: “Too late.” There is an invisible book of life that faithfully records our vigilance or our neglect.”

Therefore, on this December 10th, Human Rights Day 2020, let us stand together and remain vigilant so that we are not “too late.” Let us appreciate the reality that while the arch of the moral universe is long and bends towards justice, that it is the heroic activities of countless human rights defenders that push the arc in the right direction. We must stand together, in solidarity, during this special moment in human history, regardless of our faith perspectives, our different racial or ethnic backgrounds, with all the human rights defenders from Papua to Egypt, from France to Tanzania, from Nicaragua to Australia, from the United States to Myanmar, and say with one voice, we are with you because we are you! 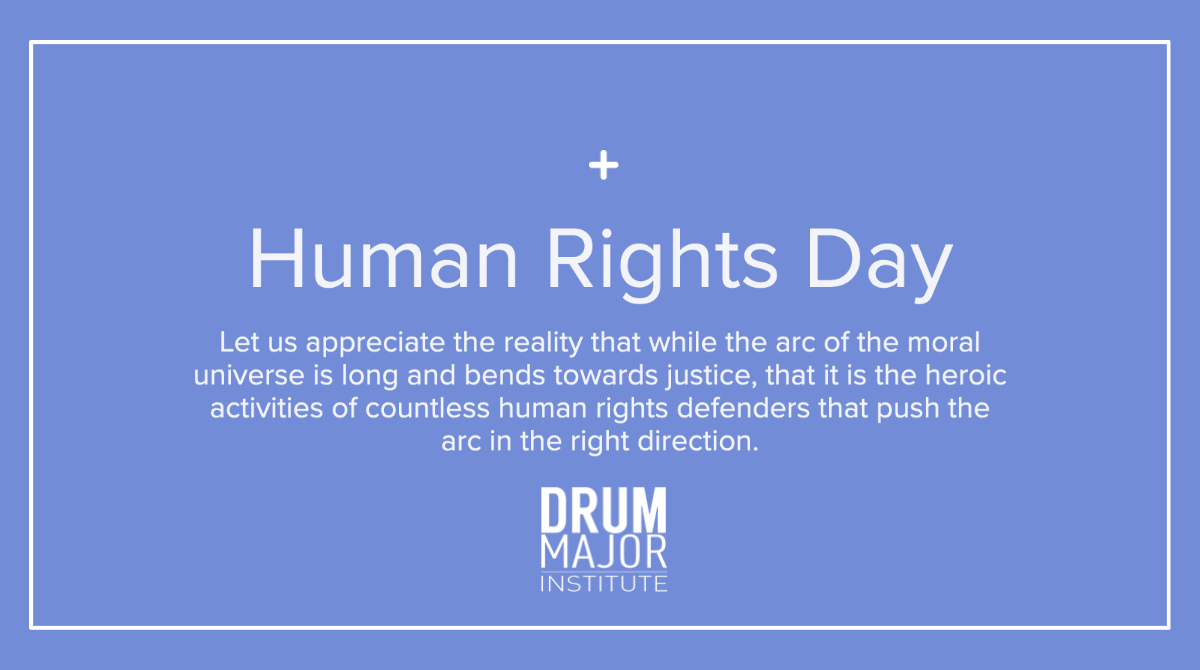